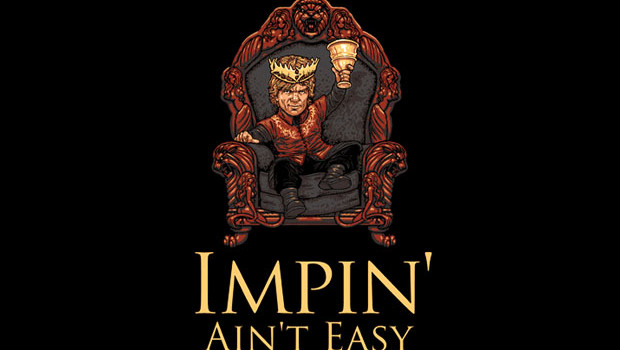 Yes, we already have a massive Game of Thrones t-shirt list, featuring over 100 designs. But dammit, this man deserves his own list: for making us laugh with his wit, for giving us belief in the underdog due to the challenges he’s overcome, and for making us root for a drunken, debauched, lover of whores! We’ll be keeping an eye out for new Tyrion t-shirts as they’re made to add to this list. If you see any in the wild, give us a heads-up! 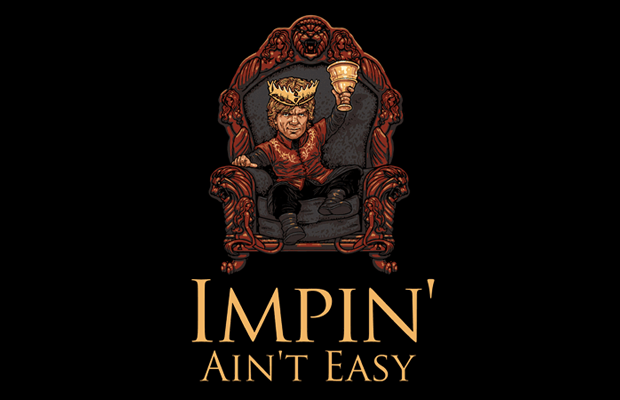 About Tyrion Lannister
Tyrion Lannister is a character who is known for his dwarfism, his sharp wit, and his cunningness. Tyrion is one of the characters who has evolved the most over the five books in the A Song of Ice and Fire series. In the first book, he follows his siblings to Winterfell, where he is accused of the attempted murder of Bran Stark and put in a Sky Cell in the Eyrie. He manages to use his wits to escape this situation, and he heads back to King’s Landing as the second book begins. It in this book that Tyrion really grows as a character, because he becomes King’s Hand. This allows him to wield immense power that he uses to manipulate the denizens of King’s Landing. Tyrion’s injury in The Battle of Blackwater causes him to lose his position, and it also signals a downturn in his fortune. In the third book, Tyrion is accused of murdering King Joffrey, and is imprisoned. His brother helps him escape, but while Tyrion is leaving he sees his father in bed with his love, Shae, and he murders them both. This incident still haunts him when he reappears in the fifth book on a ship to the East. The fifth book puts Tyrion in his worst circumstances yet, as he’s sold into slavery and forced to perform for the nobles of the East. The fifth book leaves off with Tyrion escaping and joining a group of sellswords named the Second Sons.

There are a few reasons for Tyrion’s immense popularity with both readers of books and watchers of the show. One of the main reasons is the dark humor Tyrion possesses as a way to get through his difficult life. Another reason is because despite all he has gone through, he still has a heart, which can be seen all the way up to the fifth book when he rescues the dwarf Penny from her slavery. Tyrion truly cares about the other misfits in his life, and that has kept readers invested in him.

Tyrion is also so popular in the show because of the actor who portrays him, Peter Dinklage. Dinklage brings new depth to his character and handles Tyrion’s trademark humor perfectly. The American actor was awarded with the 2011 Emmy for Outstanding Supporting Role as well as the 2012 Golden Globe for his amazing portrayal of Tyrion. His role in the show is so immense that starting in the second season he was given top billing. It is impossible to imagine the role of Tyrion being played by anyone other than Dinklage.

Overall, Tyrion is a smart, funny character with a dark past and often even darker present. He is an underdog in the world of Westeros.