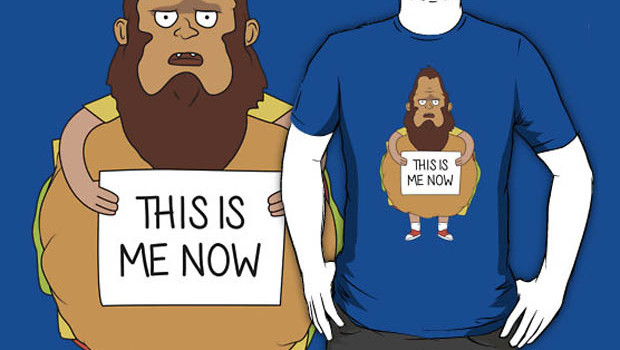 Bob’s Burgers is one of the newer hit animation series on television right now. It centers around Bob Belcher, and his family, wife Linda and three kids Tina, Gene and Louise. The main setting is the family burger restaurant which the family work in and live above. Series four is currently airing and the show has already been renewed for a fifth series, yay – and there is also a comic book in production now! Bob’s Burgers fun fact #17: in the original pilot, the oldest child was male and named Daniel. I think most fans who have seen that pilot will agree, scrapping Daniel for Tina was a great choice for the comedic value of the show. Bob’s Burgers fun fact #24: All of the main characters are voiced by males, the only lead female actually voiced by a female actor is Louise. Anyway, without further ado, Bob’s Burgers fans, enjoy these delicious tees!

Please note: These t-shirts do not actually come with candy 🙂 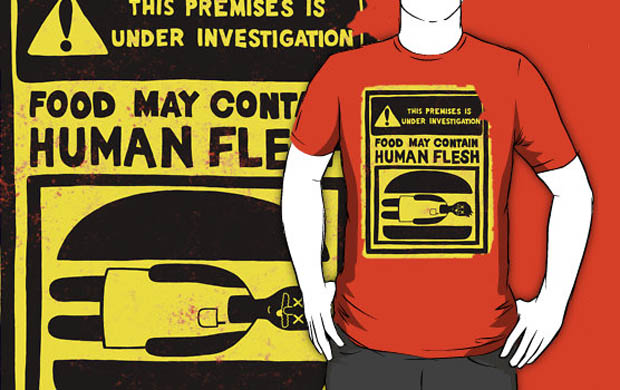 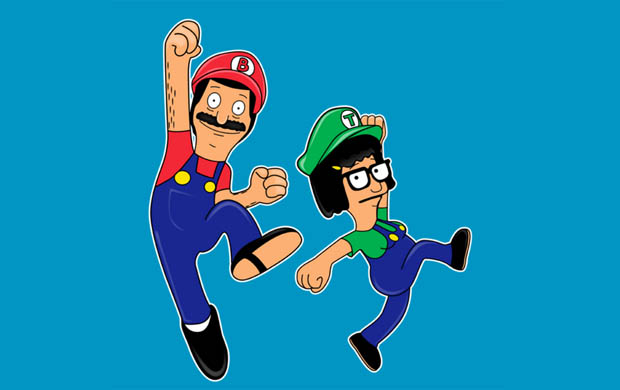 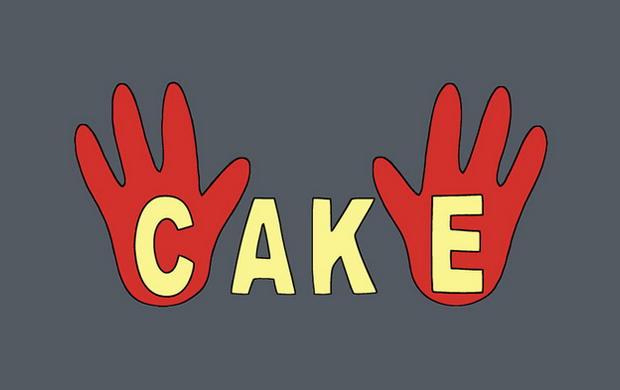 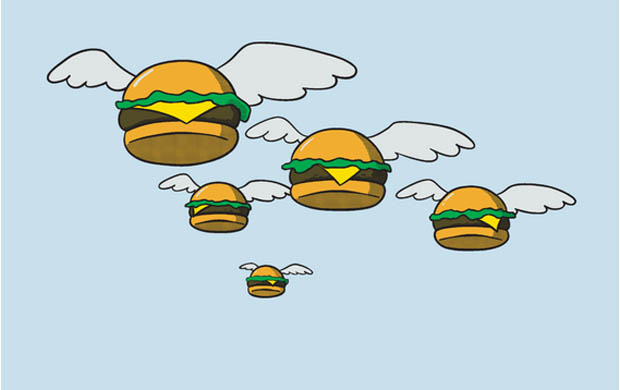 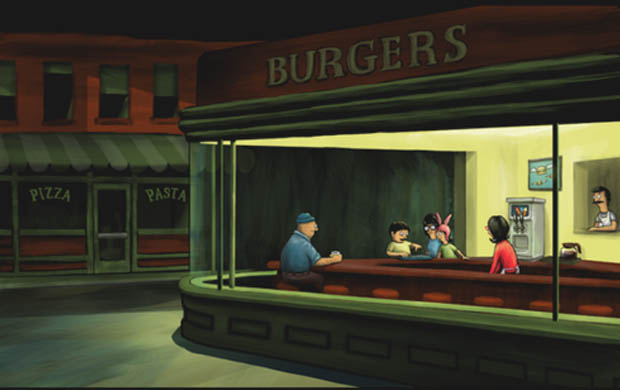 Gene This is Me Now Tee 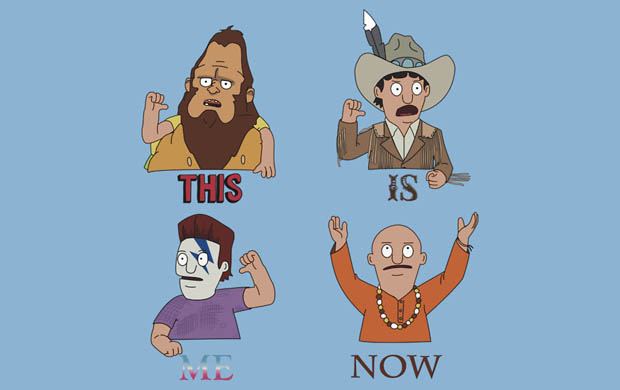 Don’t Have A Crap Attack T-Shirt 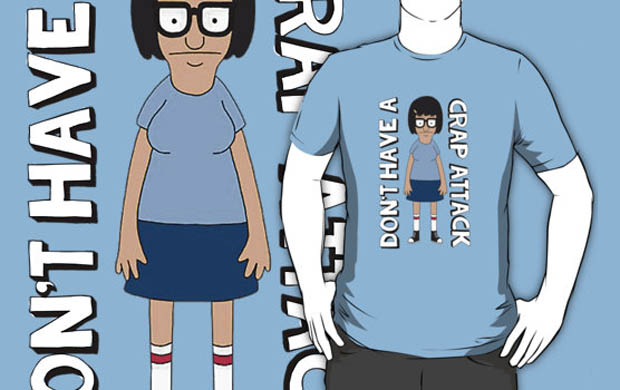 Lift With Your Butts T-Shirt 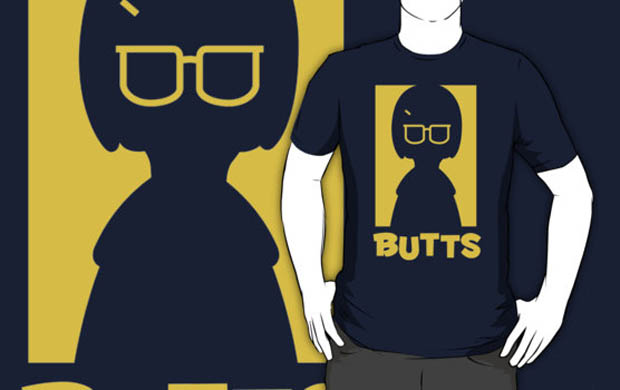 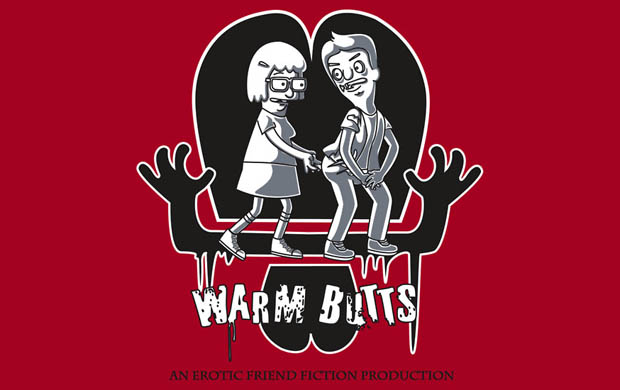 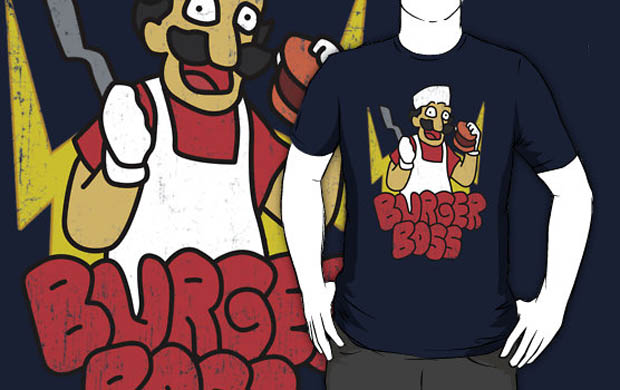 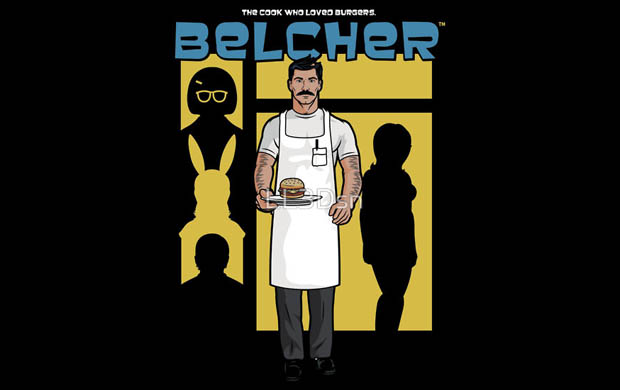 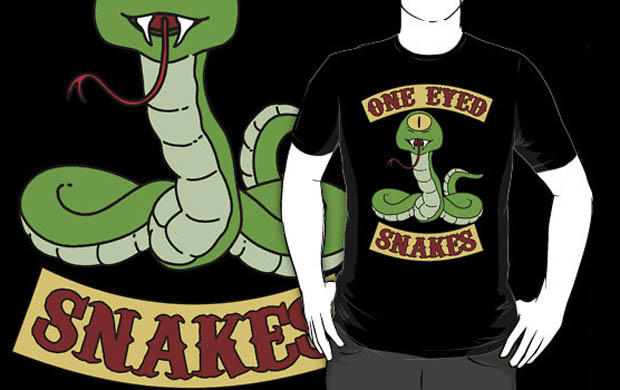 About Bob’s Burgers
“Bob’s Burgers” is the newest addition to Fox’s animation line-up on Sunday nights. Centered around a family running a burger joint, the cartoon delves into the whacky antics of the various members of the family and their unique interactions with one another. Led by patriarch, Bob (prolific voice actor H. Jon Benjamin, also the voice of the title character from “Archer”), the Belcher clan is a family devoted to keeping their business afloat but not at the expense of some hijinks.

Bob, his wife, Linda (John Roberts), and their three children live and work out of their restaurant/apartment building that is sandwiched between a funeral home and another building that is usually vacant. Though there are three female family members, the immediate family is cast almost entirely with male actors. In fact, only the youngest Belcher, Louise, is voiced by a female (former “The Daily Show” correspondent, Kristen Schaal). Rounding out the cast are comedians Dan Mintz (oldest daughter, Tina) and Eugene Mirman (only son and middle child, Gene).

The novelty of having men voice a mother and young daughters, along with the somewhat cruder animation techniques has set “Bob’s Burgers” apart from the pack in the Sunday night line-up. A revolving “daily special” menu is another in-joke that fans look forward to with each episode. Each day, the special changes from one food-centric pun to another.

The show began as a lukewarm offering among polished shows like “The Simpsons” and “Family Guy” and was met with mixed reviews and so-so ratings. Despite it’s shortcomings, Fox allowed the show to continue and “Bob’s Burgers” eventually found it’s rhythm and an ever-increasing cult following of devoted fans.

Much of the affection for the show can be attributed to the quirky family’s distinct personalities. Bob is seemingly down-to-Earth dad who suffers from fanciful moments that usually end badly for himself or the family but, as a unit, they take the lumps of life in stride. Bob’s wife, Linda, has a commanding presence and a childish sense of humor that proves the perfect foil for the long-suffering Bob.

The Belcher children each have their own crosses to bear. Tina (Dan Mintz), the oldest of the brood, is the slow-talking, sometimes taciturn pre-teen that spends her time lusting after the son of their restaurant’s biggest competition, Jimmy’s Pizzeria. Gene, the middle child, is prone to neurotic behaviors and slightly paranoid thoughts but through it all maintains his potty humor that befits a preadolescent boy. Louise, the youngest, leans more toward the bloodthirsty and macabre with her obsessions with blood and gore, yet she is never seen without her pink security hat that boasts two long rabbit ears.

The strange family is often rounded out by a circle of friends and family that can put the Belcher family strangeness to shame. Their eye-patch sporting landlord, voiced by Kevin Kline, and Louise’s bizarre twin friends, Andy and Ollie (Sarah and Laura Silverman) add to the comic chaos of the show. All in all, a premise that sounds mundane brings out the best of an odd cast of characters, even earning the show an Emmy nomination for Outstanding Animated Program in 2012.